Craftmanship of Estremoz clay figures is classified as Intangible Cultural Heritage by UNESCO. 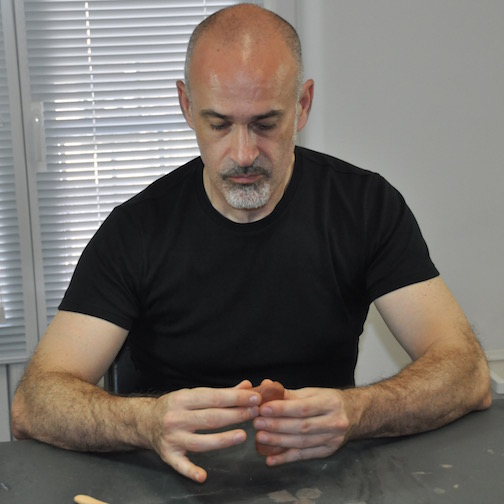 I was born in Estremoz, a Portuguese town in Alentejo province, in 1963. I am a descendant of the main family that developed the terracotta artisanship in Estremoz. My grandfather, Mariano da Conceição, contributed decisively in the 1930s to recover the art, almost lost by that time, of producing the traditional figures from Estremoz called "Bonecos de Estremoz". My mother, Maria Luisa da Conceição, was one of the main ceramists who produced these traditional local figures and that most contributed to its disclosure.

From my early years I have learned the techniques and the art of modelling clay. I kept producing figures, while studying Engineering, until the age of 21. In my youth I have participated in several group exhibitions in Portugal. Although I hadn’t any business purpose, I sold some works to private collectors and to the Municipal Museum of Estremoz. When I completed my degree in Engineering I started a professional career in Consulting and for 25 years I interrupted my work in ceramics.

Since 2013 I am dedicated to the production of “Bonecos de Estremoz” in my studio located in Lisbon.

In July 2014 I participated for the first time at the International Fair of Lisbon Crafts (FIA 2014) and was awarded the 1st Prize in the Traditional Craft contest.

In 2018 I obtained the certification of my production.

In 2019, in partnership with CEARTE and the Municipality of Estremoz, we carried out the first course on “Bonecos de Estremoz” production techniques.